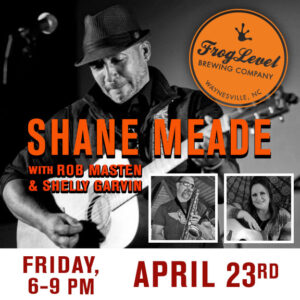 Shane Meade is a gifted singer songwriter and catalyst behind the soul-infused folk rock project Shane Meade & the Sound. Hailing from Elkins, West Virginia (a small town in those “Wild & Wonderful” parts) Shane is a self-taught late bloomer who borrowed an old guitar from his father and began playing and writing songs in the Summer of 2000. His music captivates the imagination, and audiences connect to his inspirational lyrics and universal subject matter. His unique and soulful style helps deliver an engaging live performance that is both powerful and uplifting. From a diamond in the rough, to an artist on the rise, Shane remains simple and honest in his approach to songwriting. His intimate solo shows reveal candid moments of story-telling, highlighting the true pleasures and pain in life. Shane encourages audience interaction during these performances as he turns the stage into one’s own living room, as a way of giving back to those who continue to support and appreciate original live music.