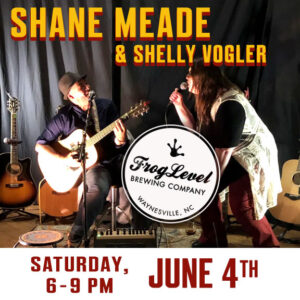 Shane Meade is a gifted singer songwriter and catalyst behind the Tampa-based, soul-infused folk rock project Shane Meade & the Sound. Hailing from Elkins, West Virginia, Shane is a self-taught late bloomer who borrowed an old guitar from his father and began playing and writing songs in the Summer of 2000 before relocating to the sunshine state. From a diamond in the rough to an artist on the rise, Meade remains simple and honest in his approach to songwriting. His music captivates the imagination, and audiences connect to his inspirational lyrics and universal subject matter. His unique and soulful style helps deliver an engaging live performance that is both powerful and uplifting.

About The SOUND… Formed in 2005, the Tampa, FL based group combines infectious vocals with feel good grooves, and has the uncanny ability of turning even the largest of venues into an intimate musical experience. Through a diverse mix of acoustic and full band performances, SMS has established a career marked by steady artistic growth and relentless touring efforts throughout the southeast, Virgin Islands, and selected cities nationwide. SMS has appeared in line-ups with the likes of Edwin McCain, Michael Glabicki & Rusted Root, Yonder Mountain String Band, Tim Reynolds, Graham Sharp, Southern Avenue, Robert Randolph & the Family Band and many more. The group has also gained recognition for their 2014 release – All Walks of Life. Their much anticipated fourth album, Livin’ In The Moment, was released in the Fall of 2021.