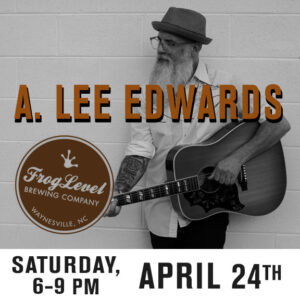 A. Lee Edwards, the songwriter behind the bands Lou Ford (1996 – 2009) and the Loudermilks (2009 – present) has been called a pioneer of the Alt-Country / Americana genre in the North Carolina region. Alan isn’t just versed and influenced by these byproducts, but the old school country and rock origination points of the music, and you can hear this in his sound that is intelligent, lively, and multi-dimensional. It is music that is direct, and which can occasionally make you uncomfortable, but later (sometimes within the same song) console you like that old friend you rarely get to see.

Enjoy A. Lee Edwards on Saturday, April 24th at Frog Level Brewing’s outdoor patio in Downtown Waynesville, North Carolina. Performing from 6-9 pm at FLB’s beautiful outdoor patio, deck and green space alongside Richmond Creek. We are pet and family friendly! See you there…